The Golden Fleece is 16th-century inn and is said to be home to 15 spirits. The most well-known ghost is that of Lady Anne Peckett, the wife of a former mayor of York, John Peckett. Many guests and staff have reported seeing her wandering the long corridor between the bars, rearranging objects and walking up the creaky staircase at night. If you’re feeling really brave, you can even book an overnight stay in Lady Peckett’s room!

The pub is also reputedly haunted by a Canadian airman and a man in a red coat uniform carrying a pistol, known locally as One-Eyed Jack. Jack is often seen in the bottom bar, which is also where the ghost of grumpy old man resides. In the top bar the ghost of a young Victorian boy, who was killed by horses outside the inn, is often seen.

The British Television Show Most Haunted visited the Golden Fleece and captured some of the most convincing and unexplainable electronic voice phenomena in their twenty year history.

The Golden Fleece is also home to a macabre replica skull of executed prisoner Elizabeth Johnson, who was hanged on the York Knavesmire. The skull was stolen in early 2022, but her skull has since been reunited with the inn, where it is believed she was a regular before her grisly death in the 1800s.

Ye Olde Starre Inne, Stonegate, is a pub with a rich history dating back to 1644. Historians actually believe the cellar is much older than the rest of the building and it is in the cellar where the most frightening paranormal activity takes place. Staff refuse to enter alone and the screams and groans of Royalist Civil War soldiers, who were treated in the building when it acted as a temporary hospital, can be heard in the dead of night.

One of the most common sightings at Ye Old Starre Inne is that of an old lady dressed in black clothes. Little is known about her identity, how she died or why she haunts this 17th century inn, but she is frequently seen on the pub’s staircase particularly by young children who are visiting the pub.

Ye Olde Starre Inne is also said to be home to the ghosts of two black cats. Local legend states that the cats were bricked up between the pillar between the door and the bar. Many customers have reported their dogs growling, snarling, and in some cases, bolting towards the pillar with one dog even knocking itself out! The tradition of burying cats in walls is a practice that has been around in Yorkshire for a long time and it is it protects the building from both fire and bad luck.

The Starre has the longest continuous licence of all public houses in York, dating back to the Civil War period and is certainly one of the most haunted.

A Punch Bowl in Stonegate is mentioned during the Siege of York in 1644, but there is no proof that it actually stood on this site. Part of the Punch Bowl was built in 1675, however the frontage was built much later in the 1930s. It is one of the many York pubs that boast a selection of ghost stories and even has a sign outside claiming it is the most haunted!

The most compelling story is that of a former landlord, who is believed to have died in one of the two historic fires that gutted the building. His ghost has been seen making his way down to the cellar by using a route that no longer exists. In the years following the fire, the steps down to the cellar were relocated and the floor was lowered but his ghost still follows the route he used to take and is said to disappear into the floor.

The pub is also haunted by a grey lady, reputed to be a woman who committed suicide after her lover was unfaithful. Her heartbroken ghost is said to wander the bar area looking for him, in the hope of reconciling in the world of spirit.

The third ghost is believed to be another young woman who was strangled to death by a drunk in the 18th century. At the time, the pub reputedly was a brothel and it is believed she may have been a sex worker who rejected the man’s advances.

The York Arms is named after the city’s coat of arms, which date from 1587. The former coffee house is allegedly haunted by one of York’s several grey ladies, believed by some to be a nun.

She is said to manifest as either a floating grey mist or gentle lady in a long white dress and has been spotted on the staircase and, somewhat alarmingly, the men’s toilets!

The pub has also seen its fair share of poltergeist activity over the years. In the 1980s, the landlord reported experiencing loud bangs and witnessed objects moving as if being pushed by unseen hands.

The Guy Fawkes Inn, reported birthplace of Guido Fawkes himself, is located steps away from York Minster and is said to be haunted by a number of spirits.

The cottage where the notorious Fawkes is said to have taken his first breath still stands in the beer garden of the inn, but it is the main building where much of the paranormal activity is now reported.

Visitors to the Belfry Suite have seen the apparitions of two ghostly children, who are believed to have died of cholera in the 1700s, whilst guests have reported hearing footsteps and objects moving in their bedrooms in the dead of night!

It is also possible to stay the night in one of the haunted guest rooms on the upper floors. Find up-to-date prices and latest availability for Guy Fawkes Inn here.

Originally built in 1417, and rebuilt in the 17th century, this solid oak building has had it’s fair share of ghost sightings!

One of the most frequently reported sightings is that of a man in a bowler hat, who paces the ground floor of the building and has been heard tutting as if he is waiting for somebody to arrive. Visitors have also reported seeing a glimpse of beautiful young woman in a white dress sat gazing towards the fireplace, before fading away into thin air.

Glasses moving and footsteps on the staircase are a regular occurrence, but the most bizarre and interesting of all the hauntings at The Black Swan is the ghostly legs that have been seen walking around the pub.

The legs, which are believed to be male, are most commonly spotted in the landlord’s living quarters but have been seen throughout the entirety of this historic building.

This Snickleway Inn has a rich history, with parts of the property dating back to the 15th century. It is believed to have served as a brothel and a Royalist powder magazine during the Civil War and is said to be haunted by no less than five spirits.

One of the most well known spirits is Mrs Tulliver and her cat, Seamus. Many customers have reported the feeling of Seamus rubbing against their legs and Mrs Tulliver herself has often been spotted by punters enjoying a pint or two of an evening.

The ghost of a young girl is also said to be haunting the inn and is often seen sitting on the stairs. It is believed that she is the daughter of a previous landlord who ran into the road and was killed by a brewer’s dray.

Another ghostly figure that is reported is that of an old man, who is seen sitting on the barrels in the cellar. It is thought this man is responsible for the poltergeist activity that occurs down there and regularly scares staff, who daren’t visit the cellar alone!

The Roman Bath Pub is located near the famous York Minster. The pub was built on the site of an ancient Roman caldarium or bathhouse, which was discovered during the construction of the pub in the 1960s. Some of the remains of the Roman bathhouse, including the foundations and an original hypocaust system, can still be seen in the basement of the pub.

Whilst it may not be recognised as one of the most haunted pubs in York, paranormal activity has been experienced. Footsteps, disembodied voices and splashing has been heard coming from the cellar. Could it be the spirits of Roman’s enjoying a dip in the once buzzing baths, or is there a logical explanation for the ghostly activity?

The Old White Swan is one of a collection of buildings dating back to the 16th century. Much of the paranormal activity in this historic building seems to centre around the fireplace, particularly in the early hours of the morning.

It is believed that the pub is haunted by a group of papists, who have been seen gathering round the fire. The Catholic spooks have been known to rearrange the furniture and relight the fire in the dead of night.

Visitors have reported chairs being moved and in some cases thrown by unseen hands. Muffled voices and the sound of footsteps are also commonly heard in one of the most haunted pubs in York.

Lendal Cellars was built on the site of the Austin Friar, a monastic order, who inhabited this area from 1272. The Friary was destroyed by Henry VIII during the Reformation, but it is said that some of the hooded figures never left the area and still haunt the vaulted cellars.

Glimpses of robed spirits and dark shadows have been reported by visitors in the seating area, whilst cutlery and glasses have been known to fly off shelves infront of spooked staff!

Ghostly orbs have also been captured on camera.

The Thomas Hotel, now known as Thomas’ Bar, was opened in 1861 by hotelier William Thomas and is said to be haunted by numerous spirits.

Ghostly figures have also been seen wandering aimlessly up and down the staircase.

Interestingly, the reports of hauntings in the building have increased since the disappearance of a pair of ballet shoes, which used to be on display in a glass case on the wall.

If you are feeling really brave and want to make a weekend of it, there are also a number of spooky hotels complete with their own ghost stories. Try our list of the most haunted hotels in York and book an overnight stay, if you dare!

Prev
The Galleries of Justice: Poltergeist in the pits 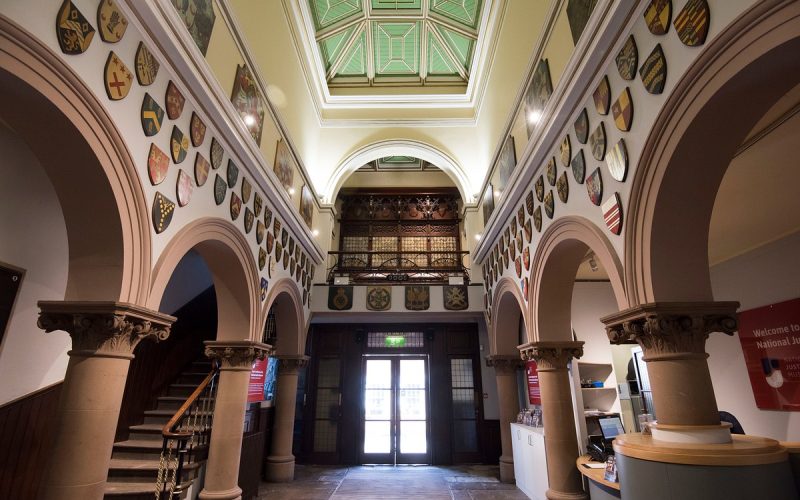 Next
How To Become a Ghost Hunter – The Ultimate Guide! 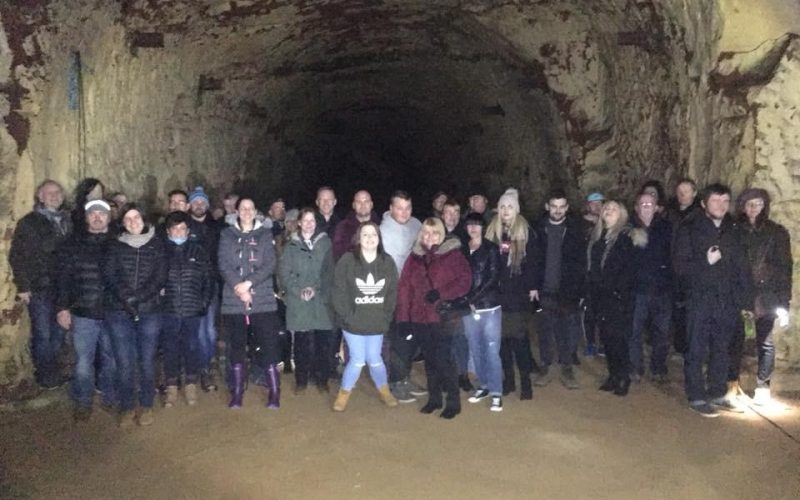 How To Become a Ghost Hunter – The Ultimate Guide! 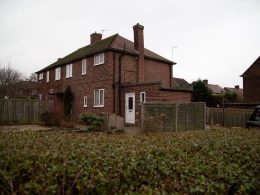 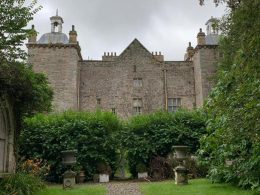 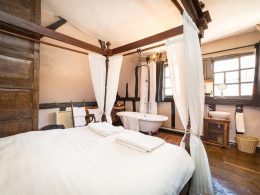 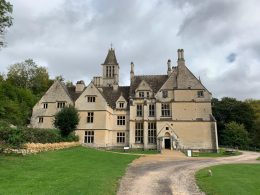